This year’s entertainment will be Celtic Justice with Dennis Gallery. The concert starts at 2:30. 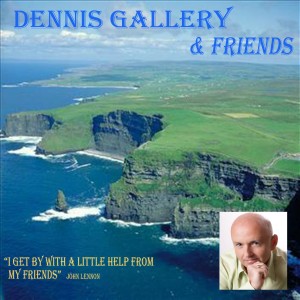 Dennis is a true by product of his upbringing in Miltown Malbay, Co. Clare. Dennis was born in the South Bronx, in New York City. Both of his parents, who originally hailed from Co. Clare, decided to move back to Miltown when Dennis was 2 yrs old.

Growing up he was surrounded by the great sounds of traditional Irish music that define Co. Clare. It was not until he returned to New York as a teenager that Dennis actually began to play music.

Once he began to play the guitar Dennis was hooked, music would become his #1 passion. It was not until Dennis first heard Dermot Henry, the great singer/songwriter from Co. Sligo, that he launched himself into the Irish music scene in New York. To this day Dennis considers Dermot as one of his greatest influences.

After many years of being in hugely successful local bands in the New York Irish scene, Dennis is now branching out on his own.

The “Friends” part of this CD is an impressive list of some of the finest musicians in the Irish/American music scene.

Produced by multi-instrumentalist Gabriel Donohue, this CD highlights Dennis’s love of singing ballads, and of his great love of traditional Irish music. Gabriel who has toured with “The Chieftains”, “Cherish The Ladies”, “The Clancy Brothers” and “Eileen Ivers” plays many instruments on the CD, and influenced many of the arrangements.

Also featured on several tracks is Joanie Madden the leader and driving force behind the internationally acclaimed “Cherish The Ladies”.

As Dennis moves into yet another phase of an already impressive and enduring career in the field of Irish music he hopes that this will be just the first in a long and successful recording career.

Tom “Muggs” Daly – ( Drums & Vocals)
Its hard to find a better drummer in the Irish scene today than Muggs Daly. A seasoned vetern of the scene Muggs brings a whole new dimension to the band, not to mention another fine singer.