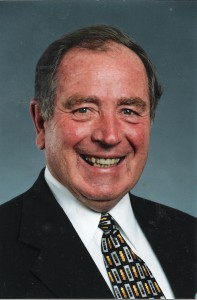 The 2012 Honoree for the Nassau County AOH Feis and Irish Festival will be John T. Dunleavy.

Born in Coole, Co. Westmeath in 1938 John Dunleavy grew up during the War years in what he described as “a beautiful little village with no luxuries.”

John’s father ran a taxi service and a small store in the village. John attended the Coole National School, which bordered the gable end of his house. As a young man, he left his native Ireland for London in 1956 and worked as a driver of double-decker buses. “It cost a lot of money to get to America in those days,” John recalled. “Many of the Irish worked in London and used England a stepping stone across the Atlantic.”

In 1963, Dunleavy came to the U.S. and just three months later was drafted into the army and was assigned to the 65th Engineer Battalion, 25th Infantry Division in Hawaii. Upon his discharge two years later, he joined the Manhattan and Bronx Surface Transit Operating Authority, a subsidiary of the transit authority, as a bus operator. John Dunleavy retired from the transit system after 25 years of service in 1990 as a General Superintendent.

Dunleavy has been an active member of the St. Patrick’s Day Parade & Celebration Committee since 1967. He has held many offices, including formation chairman, treasurer, and vice chairman before taking over as chairman in 1993. John believes the parade is a unifying event within the Irish community, despite the diversity of all the groups involved. Until a few years ago, John ran the whole operation for the Parade out of his home. He is credited with obtaining a small office in the Bronx and brought on board people to assistant in handling the huge logistic items that are now part of the Parade operations. John is responsible for the parade continued success and increase in size. Early on in the technology era, John recognized the value of the internet and authorized the webcasting of the Parade worldwide, an event that resulting in over two million hits on the Parade website this past March 17th when the Parade celebrated its 251st anniversary. Dunleavy is pleased to receive letters from people from all over the world who are astounded by how large the Parade is. He credits the all-volunteer St. Patrick’s Day Parade Committee for making the event comes together so well. “On parade day, it’s out of my hands. There are 160,000 marchers and over 2 million spectators on the avenue’.

John Dunleavy served the Ancient Order of Hibernians (AOH) in many capacities, including president of both New York Division 9 and the New York County Board.

Long active in the cause of Irish freedom, he has received many honors over the years. Two of his most cherished memories came when in March of 2000, when he was appointed an honorary member of the 69th Regiment, “The Fighting Irish Brigade,” by the Secretary of the Army and in 2010 when he laid a wreath at the tomb of the Unknown Soldier in Arlington National Cemetery in honor of all the fallen Irish Americans who paid the unlimited sacrifice in the service of this country. John Dunleavy received a Doctorate in Humane Letters from Quinnipiac University in 2007.

The Parade Chairman runs a small gardening business and is proud of being a founding member of “The Links” at Unionvale, an 18-hole championship course in Dutchess County, New York. “We’re very proud that our sign reads Céad Míle Fáilte.”It’s a little bit of Ireland on 200 acres with no trees and a view of the Catskills.” John says.

John is married to Maureen Kellett, of Virginia, Co. Cavan. They have two daughters, Patricia and Catherine, and five grandchildren.